Worries and brooding can be normal or pathological depending not on their content, but on their frequency and how they are evaluated by the person, so how often they come to mind and how we interpret them.

Generalized anxiety disorder would derive from particular positive and negative evaluations of one’s worries and brooding.

Generally, in fact, those with this disorder initially present positive beliefs about their concerns: they think that it is precisely worrying that allows them to reflect and, therefore, to find solutions to their problems or prevent catastrophes (eg. “… prepared to face any eventuality … “).

Furthermore, brooding is often associated with the superstitious belief that “worrying keeps danger away.” So, for example, a mother might fear that if she stops worrying about her child’s health, he might get really sick. In the early stages, therefore, concern is deliberately sought by the person.

Later, mainly due to the fact that in the meantime the brooding becomes pervasive

the person often begins to negatively evaluate his own worries: he thinks he cannot control them and that this could be dangerous, so he “worries about being worried” ( metapreoccupation) (eg “… I’ll be sick or crazy if I keep worrying like this …”). If so, the worries are experienced as intrusive, disturbing and difficult to interrupt.

The behaviors put in place

then, to mitigate worries and anxiety (distraction, thought control, avoidance, request for reassurance) momentarily reduce them, but in the long run they maintain and reinforce them because they leave the dysfunctional beliefs about them unchanged.

Positive and negative beliefs about brooding and dysfunctional behaviors to reduce it interact with each other, generating a vicious circle; in this way the disturbance is maintained.

In the cognitive-behavioral treatment of generalized anxiety disorder, a protocol is used that involves the use of the following procedures: 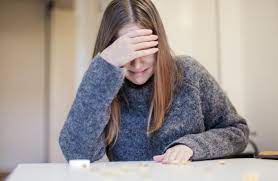 Formulation of a therapeutic contract